A Free Retriever’s Digest and arbeidersstemmen.nl

The wars in Syria and Libya do not only affect the population of these countries but the workers and jobless proletarians of Iraq, Iran, Lebanon, Egypt as well. The consequences are riots and revolts in these countries against the local oppressors and exploiters, sometimes strike movements that can open the perspective of a revolution.

The United States, Russia, Turkey and the countries of the European Union are implied in these wars as well. Sometimes by direct military intervention, more often by supporting local regimes, their oppositions or certain armies and militias. They all fight against each other for the control over the rich oil and gas resources. In addition, we see the attempts to draw profit from the flows of refugees caused by wars and poverty.

The workers, both those at work and the growing army of jobless worldwide, are the first victims of what in fact are wars between imperialist states. They are killed, wounded, traumatized and are left behind totally impoverished.

In the wealthier countries they ‘pay’ for the expenses of the imperialist war with a decline of their wages (at first with regards to the profits, subsequently in absolute terms), allowances, pensions, the degradation of medical and social care, and of education. Certain taxes and dues creep up slowly, work pressure rises, unemployment drops … on paper. Every new generation of youngsters in North Africa and the Middle East (about 30% of the population) serves as foot soldiers and cannon fodder, or rots away in slums. In wealthier countries the reintroduction of the draft service is being prepared; in the Netherlands it has never been abolished, since this year it applies to women as well.

After a brief introduction we discuss about the causes of these wars, their consequences, and in which way these can be put to an end.

The exact modalities are indicated in the attached invitation leaflet

END_OF_DOCUMENT_TOKEN_TO_BE_REPLACED 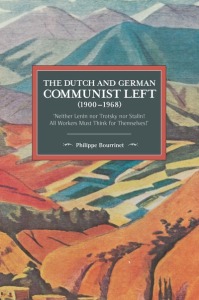 In Vol. 1#2 (Try-out issue, May 2017) of this Digest, we briefly presented this elaborate work of political history in its first English translation, that has appeared with Brill (Leiden/Boston) in 2016. This was followed by the introduction of a review on Libcom titled “Council communism or councilism? – The period of transition”.

Unfortunately, serious reviews of this important work, in either language, and notably by adherents of the communist Left, or of proletarian internationalism in a broad sense, are very rare. When we discovered a rather extensive review of the English edition in a bourgeois left-wing, Trotskyist, periodical appearing in the Netherlands, our curiosity was raised. What follows is the result of a considerate examination.

END_OF_DOCUMENT_TOKEN_TO_BE_REPLACED

An Essay by Fredo Corvo

According to a critical commentary in this review, an article by ‘Nuevo Curso’ apropos of the self-chosen death of Noa Pothoven (a severely traumatized Dutch youngster) suggests that “‘(state) assisted suicide and euthanasia’ would be routinely practiced in the Netherlands by way of a cynical reply of the bourgeoisie and its state to a degradation of the country’s health service, to the extent of constituting ‘a real mass crime’ committed against the ‘damaged and unproductive’ and the elderly in particular”. (1)

The following essay takes up the challenge that “a debate among those who adhere to the cause of proletarian emancipation should also take into account that certain moral dilemmas based on the development of medical science and technology, demographic developments like increases in life expectancy, and changing patterns of need for cure and care, will not somehow be automatically resolved after a proletarian revolution, but will have to be taken up by the proletarians collectively under qualitatively different conditions.” (Ibid.)

From a layman’s point of view, this essay examines qualitative developments in medical care in the field of technology, medical ethics and budget cuts. However, in order to analyze the financial results of measures taken by the Dutch state for each medical condition, the expertise of a medical economist would be required.

END_OF_DOCUMENT_TOKEN_TO_BE_REPLACED

At the end of June, Emancipación held its first congress. With this, the publisher of ‘Nuevo Curso’, which releases a new article almost every day, has shifted its ambitions from the Spanish-speaking region to a global scale, from an organization around basic positions to one that puts forward slogans and statements to the actual situation. However, this step forward is not without problems related to the historical origins of this organization from what is often called the Spanish Communist Left around Grandizo Munis.

END_OF_DOCUMENT_TOKEN_TO_BE_REPLACED 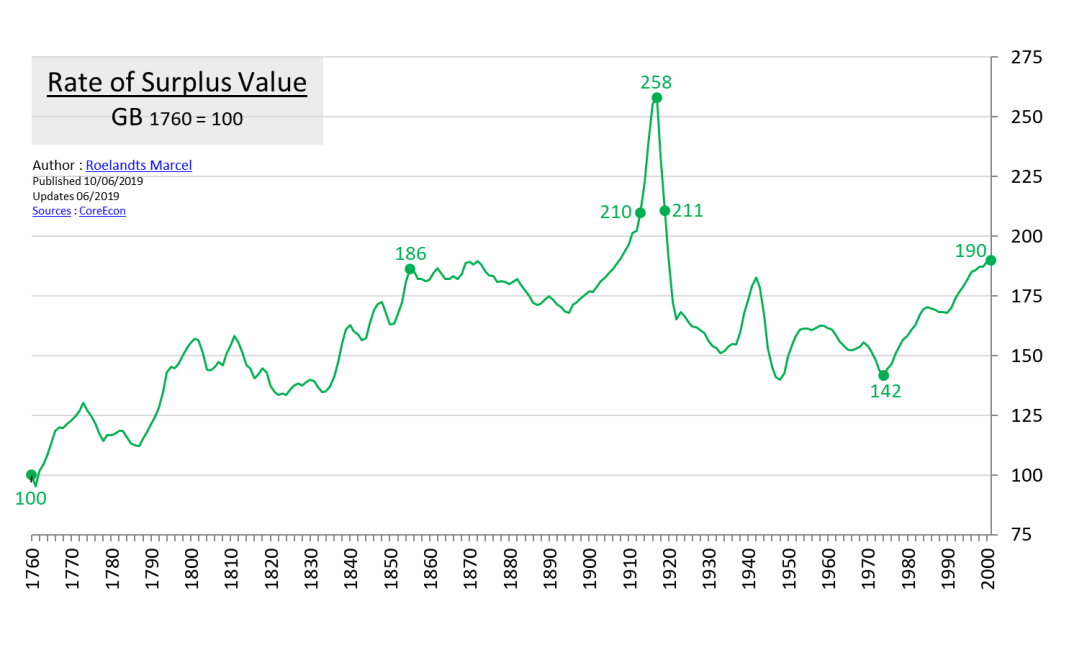 “I pre-suppose, of course, a reader who is willing to learn something new and therefore to think for himself. […] Every opinion based on scientific criticism I welcome.” (Karl Marx, Preface to the First German Edition of ‘Capital, critique of political economy’, 1867).

Taking up a longstanding concern of Marx’s that he was unable to fulfill, this work in progress treats the development of modern capitalism over the past 250 years with special attention to the classic country of its origin, Great Britain/the UK, at the hand of examined statistic sources and according to  criteria developed by Marx.

The original text is published in French language on the ‘Capitalisme & Crises Économiques’ website. Our translation is up to date with its actual version of August 10, 2019, and can be read on this blog:

END_OF_DOCUMENT_TOKEN_TO_BE_REPLACED

The following presents an article by ‘Nuevo Curso’ apropos of the tragic suicide of a youngster, that was immediately subjected to an international media campaign on “state sponsored euthanasia” in the Netherlands. Our commentary shows how easily one can fall into hawking a rant, when not observing minimal standards of verification. In a separate topic article we present the results of a first examination of official mortality statistics in this country by medical end-of-life decisions over the period 1995 – 2015.

END_OF_DOCUMENT_TOKEN_TO_BE_REPLACED

A Work in progress

“I pre-suppose, of course, a reader who is willing to learn something new and therefore to think for himself. […] Every opinion based on scientific criticism I welcome.” Karl Marx, Preface to the First German Edition of Capital.

Taking up a longstanding concern of Marx’s he was unable to fulfill, the following presents the first part of an article series treating 250 years of Capitalism at the hand of examined statistic sources on its economic dynamic, in order to draw out its perspectives.

Updates and the subsequent parts of this series will be published on  special pages on this blog and announced on the blog roll. The original version in French language is published at the ‘Capitalisme & Crises Économiques’ website.

END_OF_DOCUMENT_TOKEN_TO_BE_REPLACED

We are happy to [refer to] the latest text from the group Robin Goodfellow (RGF). (1) Coming from the Bordigist camp, it has striven to always be in tune with the class struggle, despite the desperately academic tone of its publications.

This text shows a positive spirit of openness towards the movement of the ‘yellow vests’, in which proletarians predominate. Contrary to some sects falsely laying claim to left-wing communism, Robin Goodfellow did not spit on the movement, quite the contrary. These sects did, by the way, not manifest an “aristocratism” of revolutionary “purists”, but rather the ubuesque (2) holy fear of micro-bureaucrats, ready to hide under their beds at the first signs of serious confrontation with the “forces of order”, shamefully describing the healthy reaction of the yellow vests to the terrible force of the capitalist state (3) as “useless violence.”

The text of Robin Goodfellow is very precise on the classes, or rather the heterogeneous layers that have intervened in the movement of the ‘yellow vests’. It deserves to be welcomed for demonstrating that, in the ‘yellow vests’ movement, the proletariat is very much present (workers, employees), even as a vast majority.

END_OF_DOCUMENT_TOKEN_TO_BE_REPLACED

A Press Review on the inter-imperialist standoff about Venezuela

After the fuss about the failed “humanitarian” aid operation, the economic crisis and the boycott by the United States drag on. As usual, the proletarians in particular suffer from a lack of basic necessities and medicines. In this case, they are also called upon to defend the interests of one of the two groups within the ruling class of Venezuela, those around the incumbent president Maduro (supported by the corrupt army summit, Russia, China, Turkey and Iran) and the self-proclaimed interim president Guaidó (supported by entrepreneurs and the US and — in an unprecedented action — the EU). This false choice is fought by (as far as known) all publications that defend the standpoint of proletarian internationalism, that is, those who invoke the Communist Left against both Stalin’s ‘socialism in one country’, and against the defense of the Soviet Union by most Trotskyists as a ‘workers state’, despite its ‘degeneration’ and ‘bureaucratization’, later followed by a ‘critical’ defense of the Eastern European ‘popular democracies’ and other ‘socialist’ countries that participated in the Russian bloc.