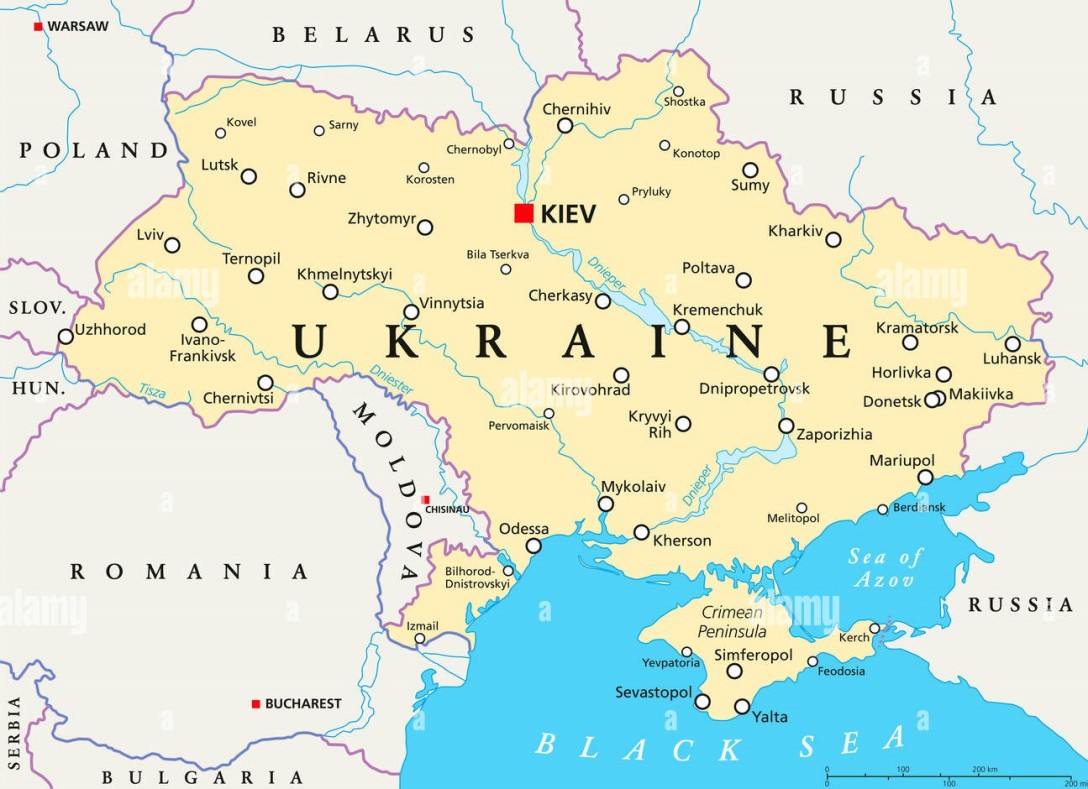 The following article published by the Istituto Onoratio Damen (I.O.D.) presents a brief summary of the escalation of the stand-off over Ukraine and warmongering talk that took place in the course of the last few months, which has come to dominate even the latest issues and squabbles related to the Corona-virus pandemic. It provides a sober evaluation of this conflagration from an internationalist perspective and an answer to the question whether a major war in Europe is on the agenda.

A new chapter of the permanent imperialist war threatens to be written in the heart of Europe. Tensions are rising on the eastern front of the old continent. The dialectical skirmishes of politics are dangerously giving way to weapons and demonstrations of force by the imperialist contenders.

Around Ukraine the main protagonists of the imperialism of the 21st Century are clashing without fail. If at a superficial glance the clash is mainly between the United States and Russia, the European Union is heavily involved, due to the very close economic and political ties, with China as a spectator interested in not seeing its commercial traffic with the most industrialized area in the world interrupted.

It is in this context of less and less cold war that the American president Biden in recent times has dangerously raised the tone by heavily accusing Russia of being on the verge of invading Ukraine and, although there was not a single indication that things were really in these terms, he granted Kiev a first military aid of 2.5 billion dollars which was followed, last November, by the sending of: “another 88 tons of ammunition as part of a $60 million “package” that also included Javen missiles already deployed against the Russians in the Donbass. At the same time, the U.S. has sent more than 150 military advisers to Ukraine who, flanked by those of a dozen NATO allies, actually direct the operations.” (1) At the same time the Secretary General of NATO, the Norwegian Stoltenberg, in a series of statements, has taken the entry into NATO of Kiev, after Estonia, Latvia, Lithuania, Poland and Romania, for granted and now imminent, thus completing the military encirclement of Russia.

The Russian countermoves came immediately, so much that Putin decided to move a substantial contingent of troops to the Ukrainian border and to start, again on the Ukrainian border, a joint military exercise with Belarus. This was exactly the reaction that the Americans hoped for in order to press their European “allies” to support the launch, in addition to those already in place, of other harsh economic and financial sanctions against Russia, including the blockade of Nord Stream 2. What probably escapes the U.S. imperialist marauder is that the time of frontal confrontations between opposing blocs is long gone. Now there exists such an interweaving of interests among the different economic areas of the world and within them that it is very difficult to separate one from the other. America itself cannot disregard China’s imports without taking into account very serious repercussions on its own economy. To have an idea of the figures involved, it is enough to think that only the exchange between Italy and Russia in 2021 amounted to over 20 billion euros and that 46.8% of gas and 23% of oil consumed in 2021 by the EU came from Russia. And with the activation of Nord Stream 2 – which the U.S. wants to block – another 55 billion cubic meters of methane per year will be added, directed to Germany. With these numbers it is not difficult to imagine what a disaster it would be for Europe to risk the block of energy supplies from Russia.

And so, while Biden does everything to increase the tension, the European countries, taking their distance, declare themselves ready to support Ukraine, but only in case it is invaded by Russia. The distances between the two sides of the Atlantic have become abysmal when Biden has ordered the deployment of NATO in the Baltic Sea on the bottom of which – as chance would have it – run the pipes of the Nord Stream. Germany, first with Vice Admiral and Chief of Staff of the German Navy Kay-Achim who defined the Russian invasion of Ukraine as “nonsense” – and for this reason was forced to resign – ; then by refusing to sell arms to Ukraine and finally, albeit through the voice of the retired General Kujat, made it clear that it had no intention of joining a military initiative against Russia because it was contrary to its interests: “Germany’s interest is to find a reasonable solution both by reducing the tension with Russia and taking into account the security of Ukraine. It cannot be, however, that we are always talking only about war and never about how we can prevent it.” (2)

The Ire of the White House

The White House was not a little annoyed by this, as after a few days the Wall Street Journal came out with this headline on its front page: “Is Germany a Reliable Ally of the US? Nein”. All the same, however, after Biden himself, using the excuse of an imminent invasion by Russia – almost as if to emphasize in this way on which side the Europeans must stand – ordered the withdrawal of a part of the staff of the American embassy in Ukraine; Germany and France broke the delay and, to avoid finding themselves involved in a conflict in the interest of others, in which they and the entire EU would have everything to lose and nothing to gain, have convened the so-called Normandy Format (3) at the Élysée Palace and initiated diplomatic negotiations with Russia and Ukraine in order to find a common solution to the crisis triggered by the US. In its turn, Ukraine, fearing to be involved in a war on behalf of others that could reduce it to a pile of rubble, has also distanced itself from Washington. President Volodymyr Zelensky denied Biden’s claim that an invasion was imminent, and – informed by Il Manifesto’s Kiev correspondent L. Di Biase – invited his colleagues to join him. Di Biase, invited his fellow citizens: “Calm down in the face of the alarming reports of the foreign press” and after him, di Biase informs us: «… His Minister of Defense, Oleksii Reznikov, added in an interview broadcast in prime time that “the Russian armed forces have not created units of attack such as to believe that an offensive is imminent”, and that therefore “the threat does not exist”.»  At the same time, the government-linked Center for Defense Strategies of Ukraine published a lengthy report in which not only the idea of a large-scale operation, but also that of the siege of isolated cities, is described as “not likely … and all the indicators examined led the research center to discard the invasion hypothesis for the whole of 2022”. (4) And so, accepting one of the conditions set by Russia for the withdrawal of its troops from the Ukrainian borders, “Kiev has suspended the examination of the ‘transition’ law that aims to reintegrate the Don-bass and Crimea and calls Russia an ‘aggressor state’ and ‘occupier’, unacceptable to Moscow”.

Finally, Italy too, although it may seem unbelievable given its long-standing subservience to the USA, has not been out of step in these recent months of growing tension. The elite of Italian industry has taken it upon itself to make the state of affairs clear. In spite of the explicit invitation of the Prime Minister Draghi and of the President of the European Commission Ursula Von der Leyen to desist, it has participated in an online meeting – organized by the Italian-Russian Chamber of Commerce last November – in which, in addition to exponents of the Russian economic world, Putin himself was present. It is known, business is business and: “Italian-Russian business, despite the collapse from 29.2 billion euros in 2013 to 7.5 in 2014 due to sanctions after the invasion of Crimea, has never stopped and is recovering, as well as business and political meetings. According to Istat, in the first 9 months of 2021 the exchange between the two countries increased by more than 43% over the same period in 2020 to 17 billion euros: Russian imports from Italy were 8.7 billion (+26.48%). Italy is eighth among Russia’s trade partners, from which it receives a third of its energy supplies, and third in the EU after the Netherlands and Germany.” (5)

And Putin, who in terms of business and billions is second to none, did not miss the opportunity to assure Italian entrepreneurs on one of the most sensitive economic issues of the moment: the rise in prices of natural gas and oil: “Italian energy companies (he said during the interview) continue to work with Gazprom [of which he is a shareholder, editor’s note] on the basis of long-term contracts and today they are able to buy gas at lower prices, I would say much lower than market prices, the so-called spot market prices, which have increased significantly by the cold winter and supply shortages […] Russia is a reliable supplier of gas.” (6) So better attract the ire of the White House than having to close a store that important and profitable.

In short, the EU does not want war, certainly not Germany, France, Italy and Ukraine. For the same reasons, Russia and China do not want it either. America could – we deliberately use the conditional – want it to slow down the decline of the dollar and its imperialistic power. But today’s America, unlike that of twenty years ago, is experiencing a very serious internal crisis. Its social body is divided, its economic and political forces are divided as never before, as are its institutional apparatuses and, among themselves and within themselves, the very states that make up the Union. In these conditions and without “reliable” allies, it is difficult for it to find itself united to follow its commander in chief and the power groups that support him in a potentially nuclear war with a very high destructive potential, as would inevitably be the case against Russia. This, however, does not mean that if, at least for now, a direct clash between it and the other imperialist powers seems to be ruled out, that this now permanent war can end. On the contrary, between ups and downs, moving from one part of the planet to another, it will continue its course of sowing death and destruction, at least until the proletarians, and all those who have nothing to gain from the war, find a way to put an end to the capitalist mode of production of which imperialism is its last nefarious landing place.

3 This is the group including France, Germany, Russia and Ukraine so called because it was created on June 6, 2014, on the sidelines of the celebrations of the 70th anniversary of the Normandy landings, and which in February 2015 led to the Minsk agreements and the “ceasefire” in the Donbass.