Presentation at the ‘internationalist week’ in Toulouse, 3 – 11 November 2017 (Revised version)

“Old mole History, you have bravely worked! At this moment the slogan, the call resounds again over the international, the German proletariat, that only the great hour of a worldwide turning point can bring: imperialism or socialism! War or revolution! There is no third!”

“Doubt is out of the question. We are on the threshold of a world proletarian revolution.”

On August 4th, 1914, German Social-Democracy – considered the “jewel of the organization of the conscious proletariat” (1) – capitulates without condition by subjecting itself with body and soul to its bourgeoisie. It votes unanimously for the war credits. Opposed to this vote, Karl Liebknecht was obliged to side with it by discipline, which he very quickly will consider as “a grave error” on his part. Only on December 2nd, 1914, he publicly votes against. He is disavowed by all SPD deputies, including the so-called left around Ledebour and Hoffmann who would form the USPD in 1917.   Liebknecht would rapidly become the vivid spokesman of this resistance against treason. He became the most popular man in the trenches and on the war ships. His slogan, on from May 1915, is “The principal enemy stands in one’s own country” (“Der Hauptfeind steht im eigenen Land”), a slogan he will not cease to hammer on, and that will very quickly be taken up by the internationalist current.

The German internationalists, whether at Berlin, Bremen, Stuttgart, Hamburg or Dresden, were entirely swimming against the current. As Rosa Luxemburg notes with despair, both at Paris and at Berlin a revolting witch hunt was going on: “(…) whole urban populations transformed into mobs, ready to denounce, to mistreat women, to shout hurrah and to induce delirium in themselves by means of wild rumors; an atmosphere of ritual murder, a Kishinev air, in which the policeman on the street corner was the only representative of human dignity.” (2)

As a national-patriotic force social-democracy became the most precious ideological capital of the imperial state. In a secret conversation with the power, the deputy Cohen-Reuss explains that the sole wish of the SPD is “to make peace with the monarchy and the army;… by all means to fill up the pit that cuts the German people in two.” It was therefor only natural that the chancellor Bethmann-Hollweg, in recognition of this betrayal, invites the commanders of the military regions to let the press of the SPD penetrate into the army barracks. (3)

The complete presentation is included in A Free Retriever’s Digest Vol.2 #02 (March 31, 2018). It can also be download separately as: AFRD Vol2#02 Supplement 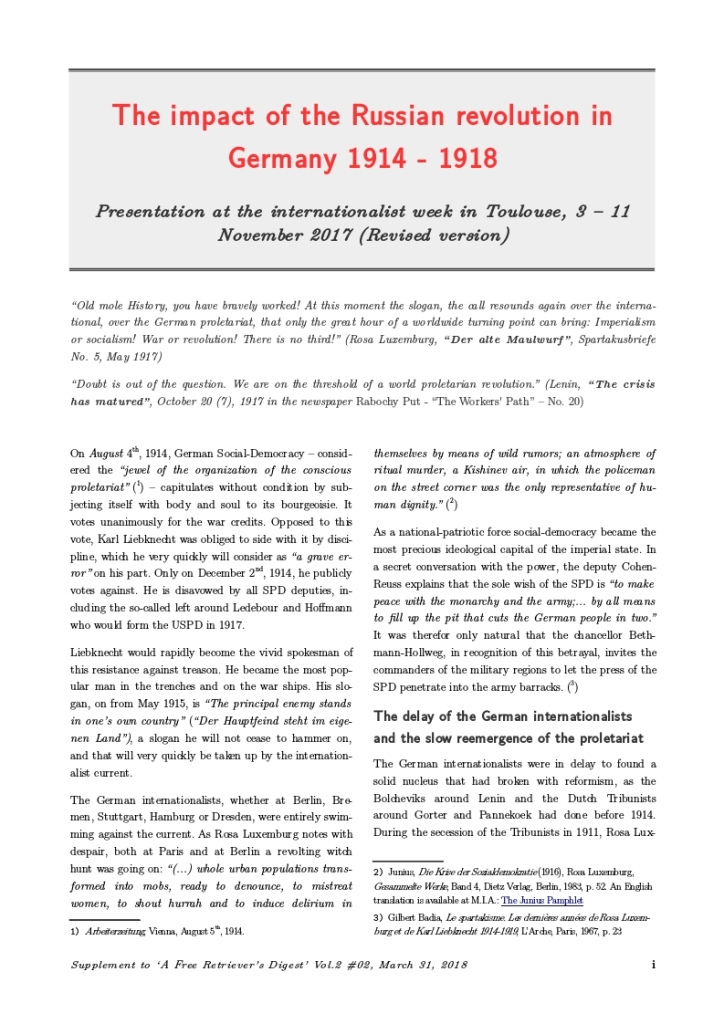