Presentation by the Author

Presenting a work is always hazardous. This work was, at its beginning, about writing the history of the Left Opposition in a period in which the international revolution had been defeated in 1921 – 1923, a defeat that has been continued by the eradication of the revolutionaries in Russia and everywhere else in the world, including China.

Our historical saga concludes with the birth of the ‘Union Communiste’ (“Communist Union”) who represents the bundling in France of the internationalist communists.

Well, this book can be read from a different angle: how has the bourgeoisie arrived at defeating the working class morally and physically in order to take it into the Second imperialist war?

… through the support of the French-English imperialists in 1935 by Russia, drawing the PCF into the defense of the fatherland; through the Popular Fronts, as has been seen in France by derailing the workers’ struggles in 1936 until their eradication, but clearer still in May 1937 in Spain through the eradication of the commune of Barcelona by the government of the Popular Front including Stalinist and anarchist ministers;

through relaunching of the war economy in France (by the Chamber of the Popular Front), in England, Germany, etc… by attacking the conditions of the working class and intensifying work rhythms.

The ‘Union Communiste’ in France has found itself sole in denouncing the Popular Front on the side of the Italian Fraction of the Communist Left, and in defending proletarian internationalism as in 1914. But the bourgeoisie has succeeded in silencing the internationalist revolutionaries this time even more categorically than in the course of the First imperialist World War.

The comrades of the ‘Union Communiste’ teach us the revolutionary endurance and will, in spite of everything, without enfeebling and compromising their revolutionary positions and ideas, in contrast to most of their former oppositionist comrades “in the current” of dominant democratic anti-fascism and Gaullist nationalism.

This is a lesson for today concerning the political difficulties the working class and the workers’ movement is confronted with. 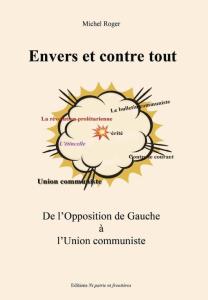 “The decomposition of the two internationals, foremost that of the III. from which we have come out, empoisons everything. We need political successes in order to change the political atmosphere. To achieve political successes, an indefatigable work is necessary”, Trotsky wrote to Leonetti in December 1933.

It is this cruel history in the course of which fascism and Stalinism have laminated the whole worker’s movement that we have we have undertaken to revive with this work. The resistance to the pressure of counter-revolution is all to the honor of some revolutionary militants who, thanks to their courage, have remained internationalists up to and until the Second imperialist War. Thanks to the existence of the latter we reconstruct the new workers’ and revolutionary movement.

“We have comrades (…) who came to us 15,16 years ago or more, when they were still young people. They are now ripe men. During all their conscious life they have experienced nothing but blows, defeats, terrible defeats at the international level, and they are more or less adapted to this situation. They enormously appreciate the correctness of their conceptions, they know how to analyze, but they have never had the capacity to penetrate in the masses, to work with them, and they have never acquired it (…). I can even affirm that many of our comrades (…) would be rejected by the revolutionary mass movement at a new turning point of the situation.” Trotsky excellently summarizes the situation of these militants in April 1939, in this interview to C.L.R. James. The last blow they will undergo is the outbreak of the imperialist war, the concentration camps, and death for some.

Still though, there are always reasons for hope, in spite of everything. Gilbert Serret of the École Émancipée expresses this very good in a letter of 18 March 1938 to Chazé: “Yes, the events evolve rapidly! But have we not foreseen this? (…) And we are only a fistful to resist catastrophe! What a misery! We will be brushed away like straws. But what does it matter, we have to stick to our revolutionary positions and act as if we must triumph. All our affectionate sympathy goes to you and to the good pals of the Union Communiste, from the depth of our provincial hole.”

What a lesson of modesty and hope!

After the storm returns the sun (7)

The march towards war (chronology) (201)

Henry Chazé and the history of the ‘Union Communiste’ (216)